The Ultimate Guide to Apache Airflow

Apache Airflow is an open-source tool to programmatically author, schedule, and monitor workflows. It is one of the most robust platforms used by Data Engineers for orchestrating workflows or pipelines. You can easily visualize your data pipelines’ dependencies, progress, logs, code, trigger tasks, and success status.

With Airflow, users can author workflows as Directed Acyclic Graphs (DAGs) of tasks. Airflow’s rich user interface makes it easy to visualize pipelines running in production, monitor progress, and troubleshoot issues when needed. It connects with multiple data sources and can send an alert via email or Slack when a task completes or fails. Airflow is distributed, scalable, and flexible, making it well suited to handle the orchestration of complex business logic.

What is Airflow Used For?

In Airflow, these workflows are represented as Directed Acyclic Graphs (DAG). Let’s use a pizza-making example to understand what a workflow/DAG is. Workflows usually have an end goal like creating visualizations for sales numbers of the last day.  Now, the DAG shows how each step is dependent on several other steps that need to be performed first. Like, to knead the dough, you need flour, oil, yeast, and water. Similarly, for Pizza sauce, you need its ingredients. Similarly, to create your visualization from past day’s sales, you need to move your data from relational databases to a data warehouse.

The analogy also shows that certain steps like kneading the dough and preparing the sauce can be performed in parallel as they are not interdependent. Similarly, to create your visualizations it may be possible that you need to load data from multiple sources. Here’s an example of a Dag that generates visualizations from previous days’ sales. Efficient, cost-effective, and well-orchestrated data pipelines help data scientists develop better-tuned and more accurate ML models, because those models have been trained with complete data sets and not just small samples. Airflow is natively integrated to work with big data systems such as Hive, Presto, and Spark, making it an ideal framework to orchestrate jobs running on any of these engines. Organizations are increasingly adopting Airflow to orchestrate their ETL/ELT jobs.

Understanding the components and modular architecture of Airflow allows you to understand how its various components interact with each other and seamlessly orchestrate data pipelines.

Read about each of these components in detail here.

There are multiple ways to set up and run Apache Airflow on one’s laptop. In this blog, we explain three different ways to set it up. In each approach, one can use one of three types of executors. We pick one executor per approach to explain:

Here are a few reasons why Airflow wins over other platforms:

Airflow models more closely with a dependency-based declaration as opposed to a step-based declaration. Steps can be defined in small units, but that breaks down quickly as the number of steps becomes larger. Airflow exists to help rationalize this modeling of work, which establishes linear flow based on declared dependencies. Another benefit of maintaining pipelines using code is that it allows versioning and accountability for change. Airflow lends itself to supporting roll-forward and roll-back much more easily than other solutions and gives more detail and accountability of changes over time. Although not everyone uses Airflow this way, Airflow will evolve along with you as your data practice evolves.

With Airflow on Qubole, you can author, schedule, and monitor complex data pipelines. Eliminate the complexity of spinning up and managing Airflow clusters with one-click start and stop. Furthermore, seamless integrations with Github and AWS S3 ensure your data pipeline runs as smoothly as possible. Also, with Qubole-contributed features such as the Airflow QuboleOperator, customers have the ability to submit commands to Qubole, thus giving them greater programmatic flexibility.

At Qubole, we introduced the following features that make using Qubole Airflow even easier:

For the continuous development, integration, and deployment of Airflow DAGs, Qubole has introduced tooling to upload Airflow Python DAG files to Amazon S3, edit them in place, and periodically sync them with Airflow clusters (in the background). You can also download other relevant Airflow files such as process and log files from the Airflow cluster page. This aids the quick, iterative development of complex workflows and keeps the files in sync. For more information, click here. 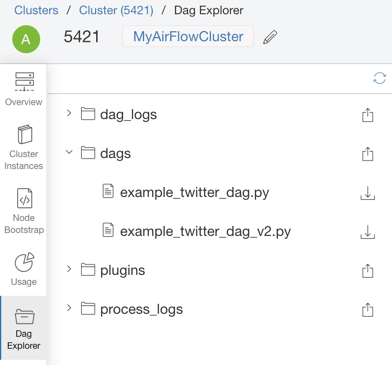 Watch this video to learn about DAGs, tasks and how to write a DAG file for Airflow. This episode also covers some key points regarding DAG runs and Task instances.

Running Airflow on the Anaconda environment provides users with the simplicity of running machine learning and data science tasks by building complex data pipelines. It also gives them the flexibility to install various packages optimized for data science tasks available within the Anaconda environment on the go with Qubole’s package management feature. Read more on how to run Airflow on Anaconda with Qubole here.

Apache Airflow As a Service on QDS

Integration between QDS and Airflow: In this blog, we introduced the Qubole Operator, which allows you to integrate Airflow with your data pipelines in QDS. Using this operator, you will be able to use Airflow to create and manage complex data pipelines while submitting jobs directly to QDS.

Monitoring: You can monitor the status of your workflows via the Airflow web server that is readily available upon launching Airflow clusters. In addition, Qubole also provides monitoring through Ganglia and Celery Dashboards.

Reliability: We’ve extended the codebase to make it more reliable. So in an unlikely event that causes Airflow to become unresponsive, restarting the Airflow cluster will automatically bring Qubole Operator jobs back to their original state.

Better User Experience: We’ve implemented a solution to cache assets, which significantly reduces the Airflow web server’s loading time. In addition, we have added the ability to navigate from the Airflow web interface to QDS easily. These enhancements are important because monitoring data pipelines is a crucial part of processing Big Data workloads.

Security and Accessibility: All the actions on Airflow clusters go through existing roles, users, and groups based security currently in production on QDS. This eliminates the need to implement other/custom ACL or security mechanisms to authorize access to your Airflow clusters and workflows.

For technical details on setup, configuration, deploying and using Airflow as a service on QDS, please refer to our documentation.