Spot Interruption Handling with Presto on Qubole, Save 60% on Cost

Spot nodes on AWS (and preemptible VMs on Google Cloud Platform, GCP) are a great way to reduce your Total Cost of Ownership (TCO) for big data workloads. However, Presto queries can fail if a Spot node is interrupted before a query result set is returned. Presto on Qubole differentiates itself via value additions that handle Spot interruptions without sacrificing reliability. These features are switched on by default and provide higher reliability and stability in a transparent manner to the majority of Qubole users who find Spot nodes to be a great way to reduce their cloud bills.

In this blog, we quantify these benefits using real-world Spot interruption data from a customer’s workload on Amazon Web Services (AWS). We also compare against a competitive Presto offering (referred to as “ABC” throughout this blog). Our analysis shows that Qubole’s Spot interruption handling can help Presto on Qubole achieve up to 15% higher success rates (no query failures) than the competition. To achieve a similar success rate, we would need to use all On-Demand nodes on ABC. As a result, ABC will incur more than 2X the cost incurred with Presto on Qubole.

This blog starts with a brief background of Spot interruption handling in Presto on Qubole. It is then followed by a brief description of our Benchmark. We present our analysis in two parts:

The below analysis holds true for any offering on top of plain open source Presto, as these features are unique to Qubole. While this study uses representative production data on queries and Spot interruptions, actual Spot Node-related benefits may vary, due to the high variability in Spot interruptions across different AWS instance types, different regions, Availability Zones (AZs), and time.

AWS issues a two-minute notification before taking a Spot node away (referred to as Spot Interruption Notification Handling- STNH). When a Spot interruption notification is received for a node, Presto on Qubole stops scheduling new queries on this node.
At the same time, Qubole adds new nodes to the cluster to replace the nodes that are about to be lost (“interrupted”), in order to maintain a steady cluster size for incoming queries.

Even with Spot Interruption Notification Handling described above, there is still a chance that a query might fail due to a Spot interruption. This is because not all the tasks running on the about-to-be-lost Spot nodes will complete during the Spot Interruption notification window of 2 minutes. For such cases, Presto on Qubole uses a query retry mechanism that determines if and when to retry the query for a higher chance of success.

The Benchmark for Costs Saved by Spot-interruption Handling

We used the latest Presto versions supported on both platforms – Presto 317 on Qubole, and Presto 0.2xx on ABC.

Figures A and B show the results of our benchmark run (with 10 Spot interruption events) on a timeline graph, over a period of 3 hours.

There were 13 queries that failed due to a Spot interruption. The graph for ABC (Figure A) shows these using Red bars. A few of these queries failed right away and are therefore represented as very thin lines overlapping Spot interruption events at 23:33. 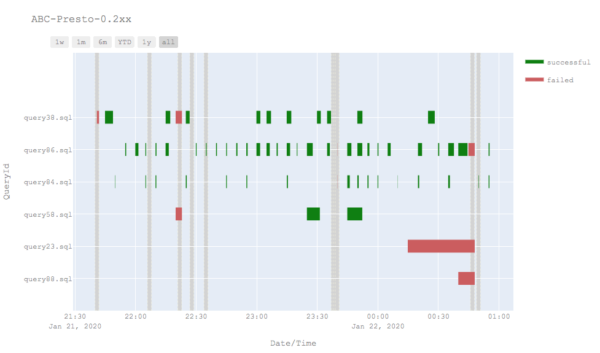 Fig. B: Benchmark Run with 10 Spot interruption events on Presto on Qubole – No query failures To achieve a similar success rate in the given time (~2.5 hours), ABC’s Presto offering would have had to use 100% on-demand nodes and incur 1.6X the cost incurred with Presto on Qubole—equivalent to 60% cost savings.

Figure D below depicts the same. To showcase how effective Qubole’s Spot interruption handling features are in real customer use cases, we took a snapshot of the queries ran and the Spot interruption events encountered during a 5-hour period on a customer’s (referred to as Customer “X”) Presto on Qubole cluster.

Figure E below shows a timeline of 341 queries that were executed over a period of 5 hours. The solid lines with different colors (dark green, pink, yellow and light green), represent the exact timeline when queries were running. The graph legend maps different colors to query status, i.e, whether the query was successful on its own, due to Spot interruption Interruption notification handling, or query retry. Figure F shows the cluster cost comparison for customer X. In this case, customer X used 90% Spot instances in the cluster and was able to get a nearly 100% query success rate due to Qubole’s Spot handling features. As seen in the figure, 3 queries were successful as a result of Smart Query Retry and 11 were successful with help of Spot interruption Notification Handling (STNH). Overall 14 queries would have failed if not for Qubole’s Spot handling features.

To guarantee a similar success rate, any competitive Presto offering or vanilla OS Presto would have to use 100% on-demand nodes and incur 1.6X the cost incurred with Presto on Qubole (equivalent to 60% cost savings). Spot Nodes on AWS (and Preemptible VMs on GCP) is extremely popular among our customers who find them very effective in reducing their cloud costs. Qubole helps Presto customers utilize Spot nodes without sacrificing reliability through built-in features that gracefully handle Spot interruptions.

In this blog, we quantified the gains from Qubole Spot interruption handling features using real production queries and Spot interruption patterns from our customers. Our analysis showed that Presto on Qubole can achieve a 15% higher success rate than a competitive Presto offering and can be effectively 1.6X cheaper than alternate mechanisms to achieve a 100% success rate.

Read more on how Presto on Qubole can be used for interactive and ad-hoc queries.

Read How to Install Apache Airflow to Run Different Executors